Buildings – Antennas – Spans (bridges) – Earth (cliffs). This is what the acronym B.A.S.E. in BASE jumping  is and it stands for the four categories of fixed locations that one can jump from.

BASE jumps were performed from as early as the first decade of the 20th century but it wasn’t until much later in 1978, when Carl Boenish – considered by many as the catalyst behind BASE jumping as we know it today – filmed the first jumps using ram-air parachutes and more specifically it was the documentation of a free fall jump from El Capitan, in Yosemite National Park, that brought BASE jumping to the surface and started drawing the extreme sports fans attention. 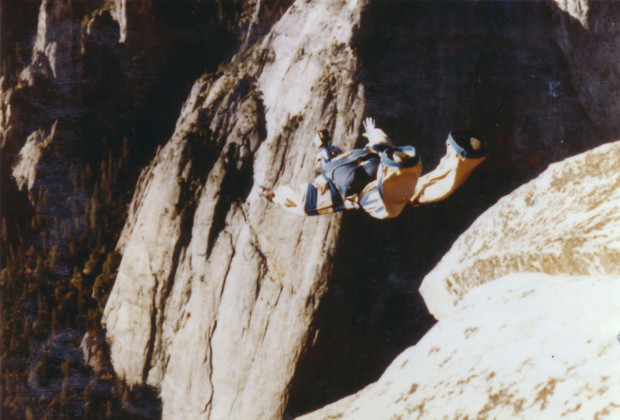 BASE jumping off the El Capitan – www.works-words.com

Even though BASE jumping is a highly dangerous sport, able to easily kill or cause serious injuries, there’s a growing number of extreme sports enthusiasts passionately taking up the sport.

Of the most impressive and dangerous BASE jumps is that of JT Holmes and the Red Bull AirForce BASE jump, off the Sears Tower. These guys took a leap off the Sears Tower in Chicago and flew through literally an urban maze in their wingsuits, granting Michael Bay’s – director of the Transformers: Dark of the Moon – wish to be the first director to bring this team in an action scene.

BASE jumping with a wingsuit is a kind of specialised flight. The wingsuit – as the name betrays – acts as wings, allowing the BASE jumpers to set off places where otherwise would have been beyond the bounds of possibility, adding to the jumps the potentiality to manoeuvre through surfaces.

Following their training flights together, it was time for them to perform for the cameras.The fearless thrill seekers were shooting for two weeks in Chicago, taking off the 1,451-foot Sears tower and the 1,362-foot Trump tower. JT Holmes, alongside Jon DeVore, Andy Farrington and Mike Swanson of Red Bull Air Force were flying in the wingsuits over Chicago arousing the citizens who were capturing everything from the streets about a mile below. 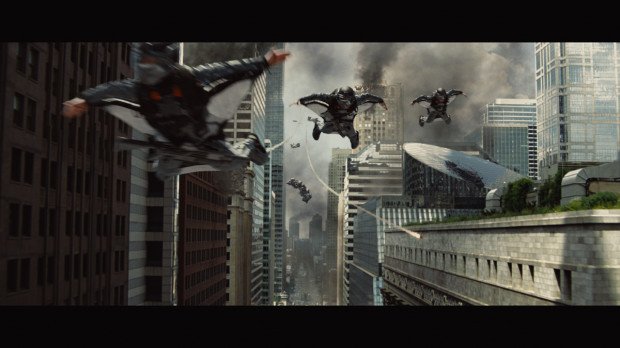 Perhaps one of the hardest shots to be taken in the entire movie – www.artofvfx.com

What’s extraordinarily amazing in this story, is the 5th BASE jumper! Julian Boulle, from South Africa, “the best wingsuiter in the world”, says Holmes. Boulle was flying with the rest of the team, whilst filming! Yes, filming! Not mounted action camera or selfie stick style filming. With a stereoscopic camera mounted on his head, Julian Boulle was flying with speeds exceeding 100mph, right at the tails of Holmes and his gang ,yet keeping his subjects center frame. I’m talking about insane skills here!

Watch what happened behind the scenes here: