If you find it hard to find your balance on an SUP board, try balancing on a bamboo pole! Single bamboo drifting is a distinct sport of the Dong people and a cultural heritage of the Guizhou Province, China. 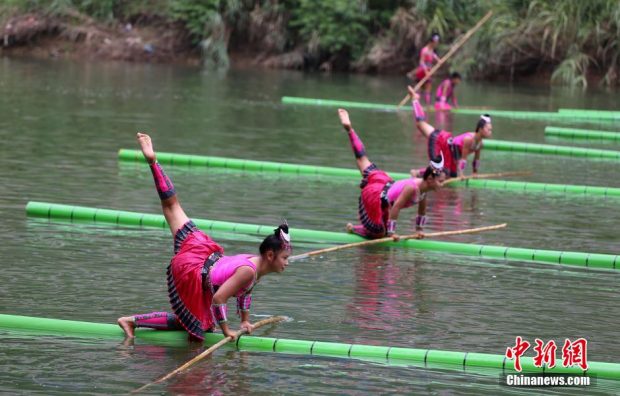 The sport is an intangible legacy from generation to generation of the people of the Guizhou Province. Middle school students of the province practice the sport and compete in single bamboo drifting in the Chinese National Games.

The requirements of the sport are simple, yet demanding! Athletes have to balance on a bamboo pole, barely as wide as one’s foot, and steer it down the river with a thin stick. Easy, you say? Well, there’s more than just steering in this race. While steering the narrow bamboo pole with the thin stick, the athletes are performing stunts and tricks. Jumping, push ups, splits are some of the most common, whereas the more experienced ones often use their imagination to experiment more.

Single bamboo drifting is a folk sport, with origins going back to China’s ethnic minorities from the Red River Basin. Extreme sport of ancient Chinese cultures, another form of meditation or both?

Watch the video below and see why this unique sport and cultural heritage of the Guizhou Province is increasing in fame and popularity!