The idea of swimming with some of the deadliest creatures in the sea might send shivers down the spines of some people. Others, however, will view it as an exciting adventure.

Scuba diving itself can be extreme at certain diving locations. Unpredictable currents, chilling temperatures, and dramatic depths are enough to thrill even the most skilled of divers. 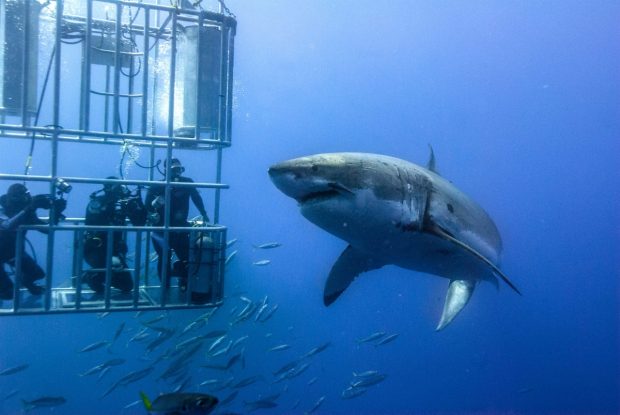 Scuba diving with sharks is an entirely different experience than diving around a coral reef. You have to remain aware of the animal’s whereabouts, which can help you judge if you’re at a safe distance from it. Knowing how to identify the type of shark and how much of a threat they are can also keep you safe.

If swimming with sharks is on your bucket list or if you want to take your diving adventures to a new extreme, consider the following locations.

Get friendly with Nurse Sharks in Bonaire

For those that are slowly warming up to the idea of swimming with sharks, diving in Bonaire might be a good starting point. Bonaire has plenty of diving locations to choose from, but those that are looking to swim with a shark should head to the White Hole.

Reefs have formed around the sides of the White Hole, allowing marine life to thrive there. Sea turtles and rays are common, but occasionally nurse sharks can also be spotted there.

Despite their large size, nurse sharks are slow-moving, mostly harmless, and are bottom-dwellers. They will only bite if they get stepped on or if someone intentionally messes with them. They’re one of the most docile types of sharks.

Those that are looking for a shark slightly more dangerous than a nurse shark should head to Cocos Island in Costa Rica. Congregations of hammerhead sharks gather at Cocos Island throughout the year.

Hammerhead sharks are easy to identify because of their hammer-shaped head. They can be found all around the waters of the island, but a popular dive location is Bajo Alcyone. There, people can dive into the water and wait until a school of hammerheads swims past them.

Hammerheads can be dangerous if provoked, but because they’re not an aggressive species, there are very few recorded attacks. An unprovoked hammerhead attack is extremely rare. So, while they’re not as docile as nurse sharks, they’re also not as dangerous as other sharks.

Those that are feeling brave should head to Fiji, where they can dive at the Shark Reef Marine Reserve. The reserve is a protected sanctuary for a diverse population of sharks, including the bull shark. The variation of sharks makes for great underwater photography.

Bull sharks are an aggressive species of sharks and have been known to attack humans. There are reports of unprovoked bull shark attacks and their bites can be fatal.

However, there are operational guides that go with divers at the Shark Reef Marine Reserve.  And because the guides are often feeding the sharks at the same time, the sharks are rarely interested in humans. The guides also help to keep divers from getting too close to sharks and can prevent attacks. 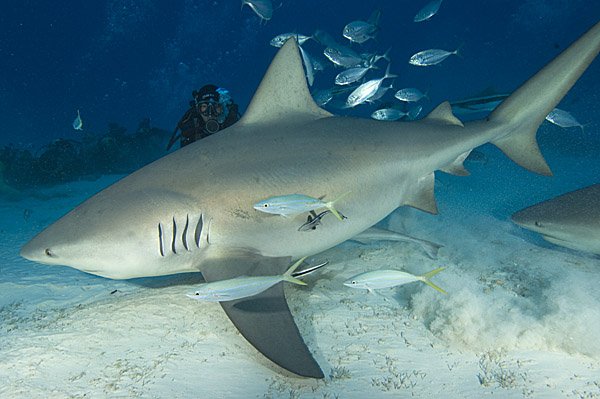 Meet Tiger Sharks in the Bahamas

Tiger sharks are some of the most dangerous sharks. Predatory behavior means that they will close in and attack prey (and humans) with the intent to kill.

The tiger sharks at Tiger Beach will approach divers out of curiosity. However, because there are bait boxes and natural prey available to them, they usually do not view humans as a food source. And, just like at the Shark Reef Marine Reserve, there are dive operators that help keep divers safe.

Great White Sharks have a reputation as being the most dangerous type of shark in the ocean. But as dangerous as they’re considered, it is possible to go swimming with sharks. One location you can spot them is off the coast of South Africa.

Great White Sharks are known for their powerful jaws. And while they do have the potential to kill, most of the time their first bite is merely a sample bite.

Those that want the rush of swimming with a Great White can go cage diving off the coast of South Africa. Cage diving allows divers to get extremely close to the sharks without the danger of being bitten.

Okay—so most dive locations that contain dangerous sharks require you to be with a guide to stay safe. However, even the ability to be so close to these fascinating, powerful creatures is enough to give anybody an extreme thrill.