A depth finder is a tool used to find fish underwater. It works by measuring how long a sound wave can travel down to hit an object and bounce back to the surface. A depth finder embraces the technology that dolphins and bats use to detect objects like fish or vegetation in the water. 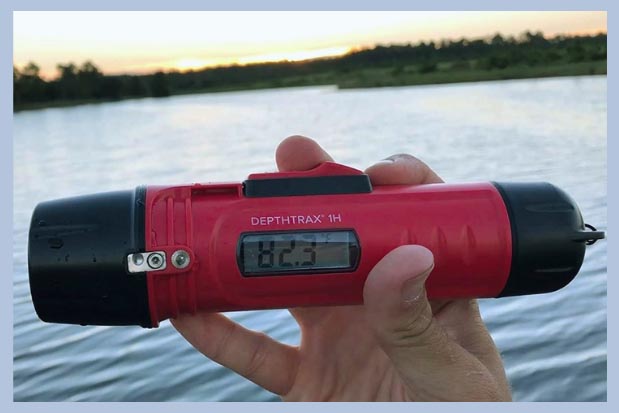 It also measures the strength of the returning pulse which shows the type and the size of the object detected. Soft objects return weak signals while hard objects return stronger signals.

A depth finder features many features that aid in fishing. The features include a color LCD screen, GPS, charting options, and a transducer also known as a hydrophone.

How a Depth Finder Works

Water vessels used for sport fishing usually have a transducer mounted on its hull. A transducer is used to create sounds waves and detects which one bounces off. When the fish finder is activated transducer sends and receives multiple sound waves per second.

The sound waves are then transmitted to the receiver which transforms the waves into electrical signals. These electrical signals are shown on a screen in a simplified form. The angle, depth, and hardness of the bottom are displayed on the screen including the obstacles in between.

This process is repeated until more accurate data is obtained. The level of hardness of an object is directly proportional to the level of darkness of the color on the screen. However, the speed of sounds is affected by the water temperature, depth, and level of sanity.

Sometimes it may be hard to differentiate between the hard and soft bottom. The fish finder can be zoomed in for more clarity of the type of the bottom. A hard bottom is displayed on the screen as a soft line whereas a soft bottom is represented with a thick line.

GPS is used in recording the fishing spot coordinates in case you want to fish later. Chartplotter helps the user to keep track of the places to go and where you are. It also helps in identifying the depth and type of contours beneath.

Reading and interpreting the data on the display of the fish finder requires a keen eye. Luckily today fish finders are more advanced and accurate hence able to distinguish different objects. Some depth finders can measure the temperature and even the speed of the watercraft.

The presence of fish is represented by fish icons on the display while weeds are represented by little weed icons. The data on the graphical display is usually shown scrolling from right to left. More recent images are on the right side.

The technology of fish finders has made recreational and commercial fishing a lot of fun and easier. The depth finder can be switch to a higher frequency to get more details on the screen. This is especially the case with commercial fishing. Current depth finders have multiple frequencies to view split-screen displays. Common fish finders include; Hummingbird and Raymarine. Follow this link; https://fishingmood.com/best-depth-finder/ to learn more about depth finders.