Name one common thing between chess and boxing. Emmm… nothing huh? Hokey and swimming? Nothing much there either. Perhaps karate and volleyball? Football and gymnastics? I’m giving you a hard time here, aren’t I? Let me give you the heads up.

Besides the athletic skill, the level of fitness and mental toughness and awareness needed, nothing seems to unite the sports above. Well, some people decided to unite them once and for all. All above are what we call hybrid sports, which essentially means a sport combining two sports, in some cases more, to create a new one.

Let’s take a sneak peak on a few below:

He who has never wanted to smash his opponent’s face in a board game let’s raise his hand! For the rest of us who have, there is now a way; with rules and all! Chess boxing it’s called and it requires a unique blend of juxtaposed skills. Each fight consists of eleven 3-minute rounds and the fighters can win by knockout, decision or checkmate. The World Chess Boxing Organisation is based in Berlin and it’s organizing Championship battles per weight category. Chess boxing was conceived by Iepe Rubingh (Dutch) in 2003. 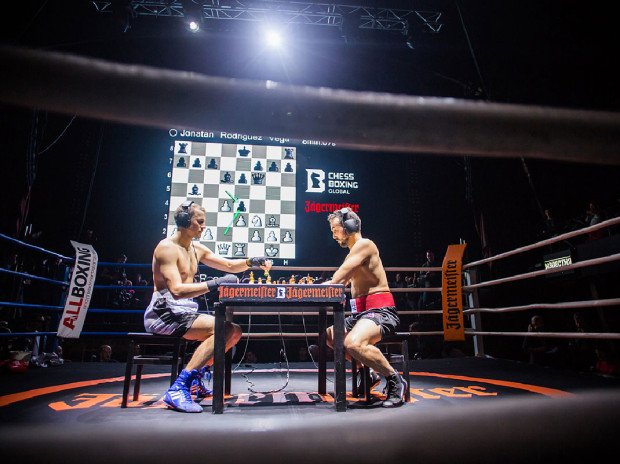 Sort of a combination of karate and volleyball, sepak takraw is a sport whose origin is intensely claimed by several countries in Southeast Asia. It’s among the popular sports there and it made its way to North America in the late ‘80s. It’s played by two teams of three players each in a court 20 x 44 ft (6 x 13.4 m), same size as a badminton court. The net is 4.9 ft / 1.52 m high. Players pass the bamboo ball from side to side without the ball touching the ground, using anything but their arms. Basic and scoring rules are alike volleyball. 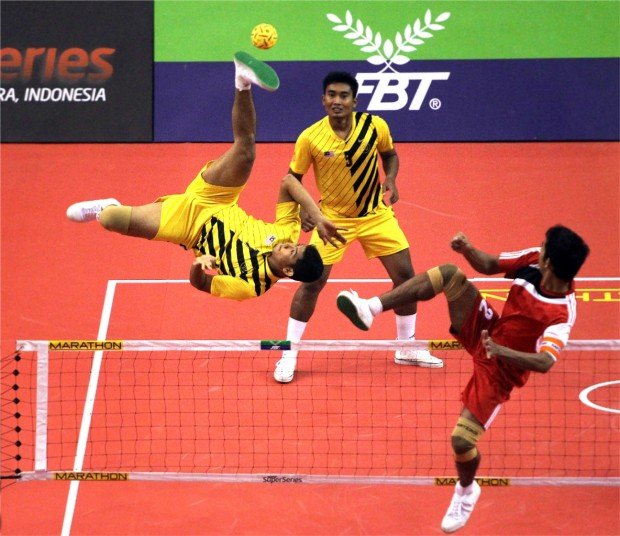 If you are someone who can’t make up his mind between volleyball, football, gymnastics, dancing and capoeira, this is the sport for you! And no, it wasn’t invented by a Brazilian guy on a hot summer day at Copacabana with a piña colada in hand. It was conceived somewhere between 2003 and 2005 by the Belgian Filip Eyckmans. With a DJ in the background and combining elements of volleyball, football, gymnastics, samba and capoeira, Bossaball is a sport that attracts the crowds wherever it goes. Did I mention that the court is inflatable? Ohh, and there’s a trampoline on each side of the net! 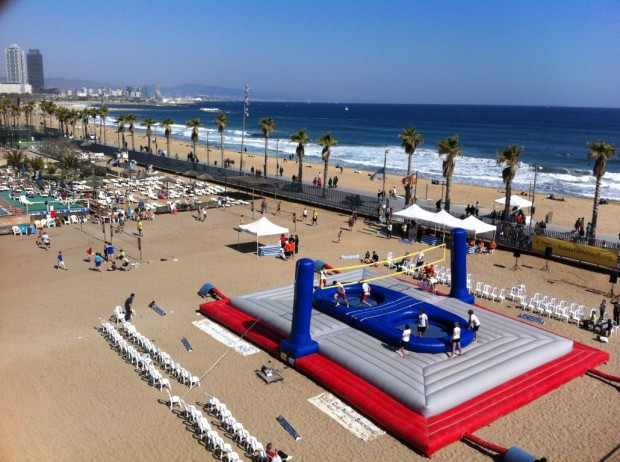 Wouldn’t you gather around to watch a sport played in this court? –  www.bossaball.nl

This one is a bit shocking… For real!

You can feel the electrifying atmosphere in almost every sporting event. Leif Kellenberger, Eric Prum and Erik Wunsch wanted to take the situation in their hands though and electrify the field literally too! Two teams of four players each, compete to get the 24 inches ball into the rivals’ goal post. Tackling and attacking is allowed; pushing isn’t. Up to here sounds pretty much like football or rugby, right? Here’s the difference! Each player has a stun gun in his hand – yes, a stun gun – and he’s allowed to use it against the player in possession of the ball. The tazers are modified to give out about 3-5 milli-amps and though shocking, cannot cause any damage other than make you twitch and drop the ball. Tazing on the shoulders and groin is strictly forbidden.

There are so many exciting new sports out there that I could probably continue writing forever. Just for now, I’ll leave you with an exciting video of Ultimate Tazer Ball and I defer writing about more EXTREME-ly different sports in the near future.