Being an adrenaline junkie is a full-time job. This much we understand. But just because you seek adventure doesn’t mean you have a death wish, and for some, scuba diving might just cross this line.

However, in reality, scuba is not anywhere near as dangerous as it seems, and it’s a huge thrill for anyone who tries it. The next time you travel near the sea, you should definitely try and get underwater. 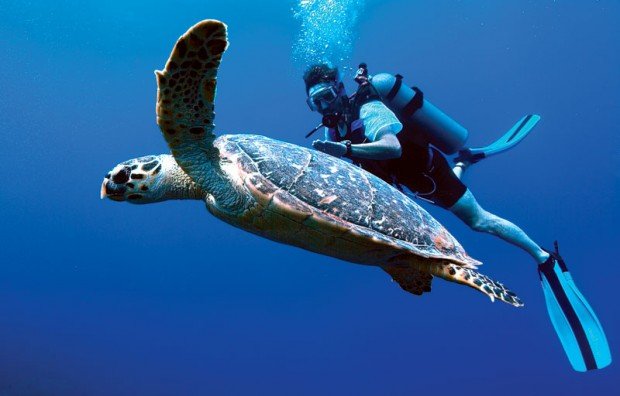 Still not convinced? Here’s why it’s safe and totally worth it:

#1 The majority of dive accidents occur from diver error

When people mention scuba diving to non-divers, the first fear most people have is that they’ll get to some depth underwater and run out of air. This is scary, sure, and the fear is understandable. But the reality is that it doesn’t just happen.

Instead, these emergencies happen when divers make mistakes. For example, they get bold while they’re underwater, abandon their plan, and go too deep or too far from the boat, putting their air supply in jeopardy. Or, perhaps the diver didn’t do all the right checks before going in, which can lead to equipment malfunctions underwater. But this isn’t scuba’s fault, it’s yours.

This might sound scary, but it should be heartening because it means you’re in control. Take your training seriously and stick to recommendations.

Guidelines set by international diving organizations, such as PADI or SSI, are intentionally conservative. If you stay within these guidelines, you will not have a problem if you follow them. Push them, and that’s a different story. But doing this is a “diver mistake.”

If you don’t feel fully confident for whatever reason, organize to dive with a guide or instructor who’s number one responsibility is to keep you safe.

It’s their job to double and triple check everything and prevent the mistakes that can lead to emergencies.

Famous last words, right? Well, in truth, scuba equipment can fail, but it’s designed to fail in such a way that won’t leave you dead underwater. For example, scuba regulators – what you use to breathe underwater – are designed to only fail one way: out. This means that if something goes wrong, such as a piece of sand gets stuck in the rubber diaphragm that controls airflow, air will continuously flow outwards.

This isn’t great, as it will deplete your air supply, but you can still use it to get that vital oxygen you need. If this does happen, you should abandon the dive and head to the surface. But knowing this truth will keep you from panicking and will make diving more fun.

Other equipment, such as computers and BCDs, can also fail, but there are fail safes. For example, if your BCD leaks air, you can drop your weights so that you are more buoyant and can get to the surface.

All in all, though, scuba equipment has come a long way since the days of Jacques Cousteau, and if you use it right and treat it well, you won’t have any issues and can enjoy the underwater world risk-free.

Another big fear people have about scuba diving is that there is all this wildlife out there that is going to attack you, mainly sharks. But, in reality, most underwater life wants nothing to do with you. Some sharks, such as bull and tiger sharks, are a bit aggressive, and if you see them in the water, you should probably leave or make sure you’re diving in a protective cage.

Do attacks happen? Of course. But so do plane crashes and lightning strikes. Does that stop you from flying and/or going outside? Didn’t think so.

Why You Should Try Diving

Hopefully you now see that diving is thrilling and adventurous but also completely safe. But if you’re still on the fence, here are some reasons you should try it:

Hopefully you now see that scuba is a completely safe adventure, one you should definitely partake in on your next trip to the sea.