A lot is changing in the world and apparently so are also the type of sports people are doing and the type of games we entertain ourselves with. That sport is a lot more than football and FIFA is not new to anyone but you may be surprised to hear some of the sports people actually do.

Extreme sports have been on the raise for a few years already and we usually think of dangerous, risky and adventurous activities when we talk about extreme sports. But did you know carrying your wife may actually be a sport? Well, it is, at least if done under “sporty” conditions. 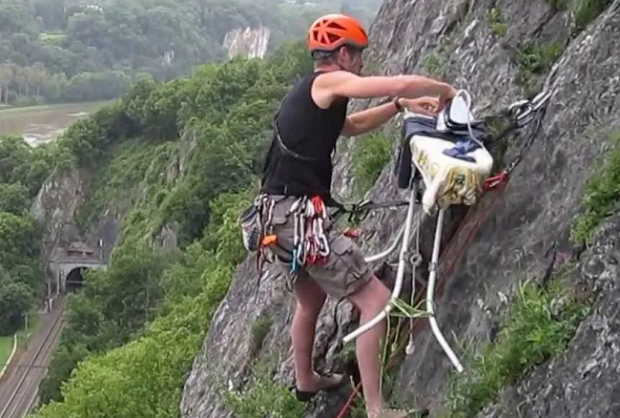 We found a very interesting article on Reyadagames.net about unusual sports video games and if it’s a sports video game, it must be a real sport, right? As it seems, we are getting more and more sports games by the day because people are becoming more interested in doing sports and playing games with sports. Some are okay, but then there are some we think are a bit weird, strange or even “extreme”.

At the end of the day, sports are for amusement and for people to have a good workout while they are at it. No matter how weird sports are, we are sure there are people having a blast doing them, we for sure had fun writing this article. Here they are, some of the strangest sports ever.

You definitely haven’t seen it all if you have never watched the strange sports games that are listed below. While they may have you questioning the sanity of the participants, you will undoubtedly have a jolly good time watching them.

We have no idea how something that was part of doing the laundry suddenly turned into a sport, but well, it’s here, and once a sport starts, it’s safe to say that it is here to stay. Extreme ironing takes the regular ironing of clothes to a new level. In the sport, you have ironing boards placed anywhere and everywhere. We have them in caves, waterfalls, kayaks, and well, anywhere where the ironing board can stand. The aim of the sport is to get a perfectly pressed shirt at the end of the day. The sport started out in Britain, and it has managed to get quite the following.

This is a sports game that we are sure that the ladies will love. It is a sport that is played mainly in Finland, and as the name says, a man must carry his wife as fast as he can through an obstacle course. As easy as this may be, few rules must be kept. For starters, the course needs to be 253.5 meters, and it must have one dry and two water obstacles. Lastly, the wife must at least 49 kilograms. Should you drop your wife during the course, other than a very angry wide, you will also get a 15-second penalty. The winner will then be rewarded with his weight in beer.

We have no idea who came up with this idea, but it is fascinating. Underwater water hockey is also called octopush and is played on the floor of a pool. Just like normal hockey, the players must attempt to guide the puck towards their opponents’ goal using Nok hockey sticks. However, since humans can’t breathe underwater, the players will not be able to keep possession of the puck for long as they will need to go up for some air.

Ever wanted to play volleyball on a trampoline but thought it wouldn’t be fun? Well, you had a great idea because there is such a sport in Belgium and it called Bossaball. It is played with 5 players on each side, and the ball can be hit up to eight times before it crosses the net.

At first, you would think it is a sport where you roll cheese as fast as you can right? However, that’s not the case. Cheese rolling is, in fact, a sport where the players need to chase the cheese down a hill. The players race behind a wheel of Gloucester Cheese and to make sure that everything is fair, the cheese gets a one-second head start. Does not seem like much we know, but the cheese can be really fast and reach speeds of up to 112km/hr.

Parkour is an American sport, and according to the definition on their website, it is a sport that involves a lot of physical discipline. The players need to be able to overcome the obstacles in their path by adopting their movements to the environment.  That makes it sound very professional, but when you watch the sport, you will literally see a lot of running, jumping, climbing, and balancing that we don’t think the human body is supposed to be able to do.

We have no idea where someone got the idea to mix chess and boxing into one sport, but well, human beings are known to be very creative. The match will alternate between both the activities of chess and boxing, and it can have up to 11 different rounds. A win in the match will be determined by either a checkmate or a knockout, whichever of the two comes first.

Sounds fancy, but allow us to put in a simpler language, and call it portable toilet stall racing. This sport has three teammates, two pushers, and a rider, and they must be able to guide their mini-restroom across the finishing line. The outhouse or mini-toilet is set on skis, and it needs to have a toilet dispenser and a toilet seat. To add the icing to the cake, the competitors in this sport are very creative when it comes to the decoration and the naming of their toilet sleds.

Give it a try

We bet that the weird sports that are listed in this post, and others, were actually invented out of boredom. They are downright wacky and wild, but will surely keep you entertained, unlike some mainstream sports that we are accustomed to.