Kids love being outside. In fact, most of us remember playing at the park or in our yards as kids on a hot summer day. Now, we often want to make sure they’re getting exercise, but not if it means they’ll be bored or sad when they’re out there. That’s where these fun and easy games come in. 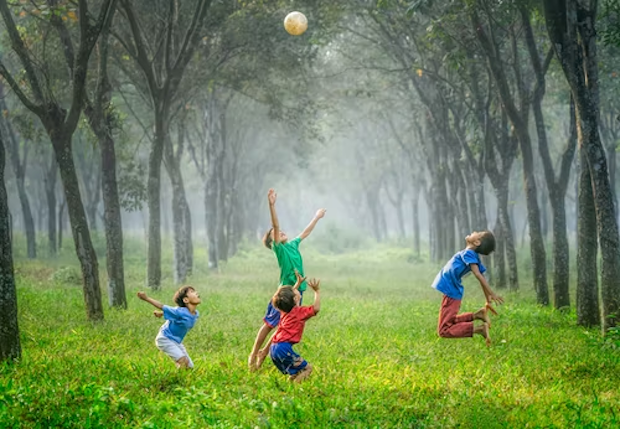 They’re completely appropriate for kids of all ages and will get them even more nuts about being outside during the summer months. So here is a list of a few games or activities that are perfect for getting the family outside:

Frisbee is one of the most popular outdoor games played by kids and adults alike. The simple act of throwing and catching a Frisbee can be great exercise, but it can also get a bit extreme. There are a number of competitive games that can be played with a Frisbee, such as:

Ultimate Frisbee is a fast-paced, competitive sport that is played with a Frisbee. The objective of the game is to score points by throwing the Frisbee into the opposing team’s end zone.

Ultimate Frisbee is a team sport, and each team typically consists of seven players. The game is played on a field that is roughly the same size as a football field, and there are 10 “end zones” at each end of the field.

The game is divided into two halves, and each team has four chances to score points in each half. If the Frisbee is not caught by a member of the opposing team, it is considered an “incomplete pass.”

Ultimate Frisbee is a relatively new sport, and it was first played in 1968. The sport has grown in popularity in recent years, and it is now played by millions of people around the world.

Disc golf is a sport that can be played with a Frisbee, and it’s becoming increasingly popular as a competitive game. The basic premise is simple: players throw their discs at targets, and the one who gets the most discs on the target in the least number of throws wins.

However, there are a lot of strategies involved in playing disc golf well. Players need to choose the right disc for each throw, taking into account factors such as wind speed and direction. They also need to be able to read the terrain, judging how their disc will bounce or roll after they throw it.

As with any competitive sport, practice is essential for success in disc golf. But if you’re looking for a challenging game to play with a Frisbee, disc golf is definitely worth checking out.

While most people think of Frisbee as a casual game to be played at the beach or in the park, there is actually a competitive sport known as freestyle Frisbee.

In freestyle Frisbee, players use their bodies and the Frisbee to perform acrobatic tricks and maneuvers, often set to music.

There are generally two ways to compete in freestyle Frisbee: individuals or teams.

In individual competition, players perform a routine lasting up to three minutes and are judged on their technical skills, originality, and showmanship.

In the team competition, two or three players work together to perform a routine lasting up to five minutes. The routines are usually choreographed in advance and can be quite elaborate, involving complex throw-and-catch patterns as well as daring flips and catches.

Freestyle Frisbee is a relatively new sport, but it has been growing in popularity in recent years, with competitions being held all over the world.

If you’re looking for a more extreme way to play Frisbee, there are also a number of video games that feature the popular game. In addition, there are a number of websites dedicated to fraternities where you can find tips and tricks for playing the game.

Whether you’re looking for a simple game to play with your kids or an extreme way to compete with your friends, Frisbee is a great option.

Pogo sticks are a perfect example of a kid-friendly outdoor game that can get a bit extreme. They’re easy to use and require very little setup or equipment. Plus, these games are a lot of fun! But they can also be dangerous if kids aren’t careful.

Pogo sticks are spring-loaded, which means they have a lot of power. If kids lose their balance or land wrong, they could end up with a serious injury.

That’s why it’s important to supervise kids while they’re using pogo sticks and to make sure they wear appropriate safety gear, such as helmets and pads.

With a little bit of caution, though, pogo sticks can be a great way for kids to burn off some energy and have a blast at the same time.

When it comes to summer fun, a water balloon fight is one of the best ways to beat the heat. It’s a classic backyard game that gets everyone involved and keeps everyone cool.

But if you want your water balloon fight to be a little more exciting than just throwing balloons at each other, here are three new ways to spice up the fun:

This is an easy way to get kids involved in a game while getting some exercise at the same time. Set up two teams with two people on each team.

The first person will fill their balloons and run them over to his teammate who throws them at someone on another team. Then the second person runs over and does the same thing until all of the balloons have been thrown. The team with more people who don’t get hit wins!

II)Water Balloon Toss Into a Target

In this game, players line up on opposite sides of an open space and toss their balloons into targets set up about 20 feet (6 meters) away from each player — for example, a piece of paper taped to a tree branch or an empty plastic soda bottle standing upright on its side in the grass with its mouth facing away from the players. The player or team who gets the most points wins.

This game is similar to regular dodgeball, but with water balloons instead of balls. It’s a great way to cool off while enjoying a classic game. Set up two teams on opposite sides of a line and have them throw water balloons at each other. If a player gets hit by a balloon, they’re out. The last team with players left standing wins.

Whether you’re looking for a classic game or something new and exciting, water balloon games are a great way to beat the heat and have some summer fun.

So, what are you waiting for? Get outside and start playing. And when the inevitable question of “what game should we play next?” comes up, be sure to have a few ideas ready. These three games are perfect for getting your heart rate up and having some good old-fashioned fun with friends and family.

Just be careful not to get too carried away – it’s easy to forget how much fun being active can be when you’re caught up in the excitement of the moment.