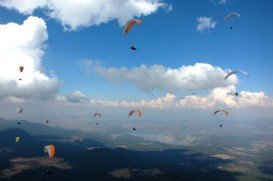 Orizaba is a city and municipality in the Veracruz Mexican state, in the eastern Mexico. At the north side of the city of Orizaba, there is a volcano named ''Pico de Orizaba'' with a height of 5636 m/18491 ft. Pico de Orizaba is the highest mountain in Mexico and the third highest in North America.

Costa Esmeralda is a stretched line of beaches, running along the northeastern side of the Mexican state of Veracruz, on the Gulf of Mexico. Veracruz is divided into 212 municipalities and its capital is Xalapa-Enriquez.